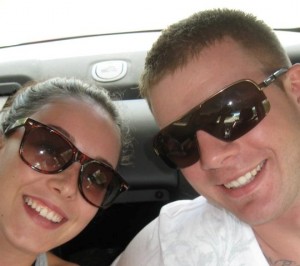 James girlfriend Morgan wrote this letter to him. It was read at James’ Celebration of Life service.

My day always started with a text from James.  How I looked forward to that and how I will miss it so much.

James had a great sense of humour.  One day our long haired cat, Mittens, had come back from the vets after a shave to get rid of her mats, looking like a Chihuahua dog with a lions mane around her head that the vet had left uncut.  My family all knew Mittens was a very proud and vain as most cats are and we were careful not to notice in front of her how odd she looked.  James came to visit that day and when their eyes locked in on each other (James had the most expressive eyes),  Mittens knew in a second it was true, that she looked ridiculous.  This was only confirmed when she heard James roar with laughter as she scooted under the bed where she stayed hidden for the balance of the week.

James was perhaps more of a private person that you might think.  He was kind, considerate and thoughtful.  We were together for three years but it was really in the last year he let me fully into his heart.  We were so close we would tell each other everything.  He was my best friend.

James was so into family.  He showed me how important family events were and taught me how to love those times and treasure them forever.

Another thing James and I shared was our love for our friends.  We both felt it was important to spend at least one night a week alone with them.  James, you should know my friends have been so great to me during this awful time and your friends have embraced me as an extension of their love for you.  They are our friends forever.

James did so much for me.  Most people wouldn’t know he was a wonderful cook who made terrific meals and he even cleaned up afterwards.  He would always do things for me 24/7.  Even one of the few men in the world who made his bed first thing and sometimes, mine as well, if I was a bit slow on a day.

James had a maturity well beyond his years.  At 23 his plan was on schedule.  His career at Black and MacDonald, which he loved, his financial goals which he was putting together on advice from his grandfather and his girl, me.

The last number of days have been so hard and sad.  I review his text messages and pictures to remind myself how happy we were.  He loved me and I loved him.  James, you will be in my heart forver.

I will miss James so much.  Life feels so unfair right now and I want you back so badly.  I know David and Elaine, Dan and Jaycie, his grandparents and all his friends and family have lost a big part of them as well and I will be close to them forever as we need each other.  We will never stop remembering and loving you James.  ~Morgan~ 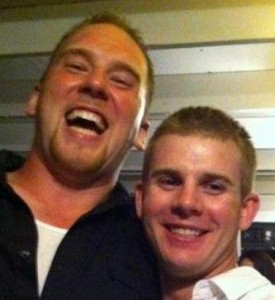 During the reception after the Celebration of Life service, James best friend Justin has these words to say about James:

I wanted to do this speech in James’s honor because I felt I was his closest friend. As I began to think of the outlandish favours he has done for me, or the truly unforgettable memories we have created over the years it hit me.  All of you out there in some way have had the same type of experiences, or memories alongside James.

Maybe you have been woke up to your cell phone ringing at a mysterious location, and it be Jim on the other line, saying he’s on his way with Gatorades and timmies breakfast sandwiches, be there in ten.  Or if you ever found yourself on the verge of making a big decision, Jimbo would be the first one you’d call to see if he’s done any research, and if he hasn’t yet, he would, but sometimes you would leave the conversation without any big decisions to make at all, because he made it 110 percent clear that it just wasn’t the time.

James would never shy away from using his electrical skills.  James, Jarrett, and I actually built a room in Jarrett’s basement.  Jim said there was no chance he would be a part of it if Jarrett was going to buy a normal light for the closet.  Opposed to the expensive closet light which was up to code.

There are countless little things like really getting on your case when your drinking pop like a parent would, or how he’d drag you to the gym for 30 minute cardio sessions, or purposely getting under your skin when you’re lacking motivation.  Coming out of the gas station with extra 5 hour energy’s if we weren’t hyped enough, or maybe allowing you to copy off him through high school because he was always prepared.  He had the ability to persuade you to do what he wanted just off of pure enthusiasm and undeniable motivation alone.

I have to express his love for Morgan. Whether he was getting upset she was hanging out with a childhood friend, and deep down he knew they were just friends, or going to the mall with him as he went above and beyond for Christmas, birthday, and anniversary gifts.  He has told me many times how he loves you Morgan, and how he loved the vacations you went on together.

In closing, I want to tell you all what I gathered from my conversation with Debbie.  James was needed in a higher place.  He may have been one huge life that has been taken from us, but he was a rare person capable of many things that will save so many more lives, and already has.  ~ Justin ~